Cheyenne Woods: No doubt Tiger will revive his game 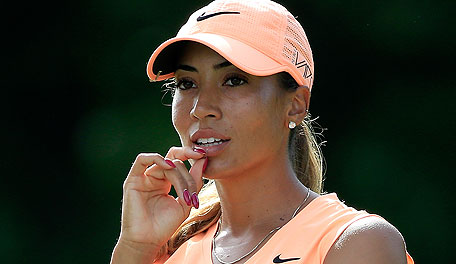 When Cheyenne Woods opened the Manulife LPGA Classic with a 63 a few weeks ago, she got a text message from her famous uncle.

Tiger Woods noted that his young niece waxed him by 10 shots that day, with Tiger opening the Memorial with a 73. Cheyenne has noted through her career that Tiger has been a source of support. She’s returning the favor with Tiger’s struggles continuing with his missed cut last week at the U.S. Open.

During a rain delay in Golf Channel’s coverage of the Walmart NW Arkansas Championship, Jerry Foltz asked Cheyenne about her uncle’s struggles.

Cheyenne was off to a strong start when rain suspended play Friday at Pinnacle Country Club. She was 3 under through nine holes, just one shot off the lead. Her rookie season has been a learning experience. She tied for 54th after that hot start at Manulife, her only made cut in her previous seven starts.

About Tiger’s plight, Cheyenne said he continues to be a source of inspiration: “I got started playing golf because of Tiger. I know a lot of the girls out here, we are all about the same age, so we remember watching him dominate. You watch Tiger highlights, and I don’t think there is any other athlete who can get you as pumped up as Tiger does, when you see his highlight reel.”