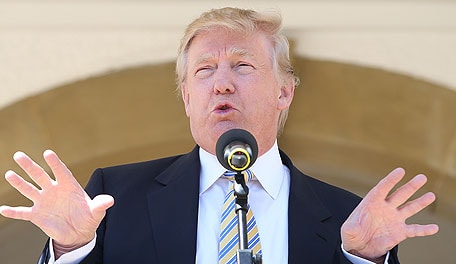 Donald Trump often touts that he invested in golf while the rest of the business world was running from it, but he may be exaggerating the return on that investment.

According to documents released by the Federal Election Commission on Wednesday, Trump, who is currently seeking the Republican nomination for President of the United States, claims his 16 golf properties are worth between $500 million and $675 million.

On Thursday, a CNBC report alleged those valuations to be grossly inflated:

"The financial disclosure form values many of Trump's courses at two to four times the multiples of annual revenue other courses command, in an industry where most operators struggle to make profits, according to golf course appraisers. An industry rule of thumb is that courses are worth 1 to 1.5 times their annual revenue.

"Trump reported combined revenue of less than $160 million, excluding the Miami resort, which doesn't break out golf-related revenue, and land sales at the Los Angeles property. Based on the industry standard valuation metric, that would put the value of Trump's golf empire closer to $160 million to $250 million."

Trump's net worth as disclosed to the FEC is at least $1.15 billion. The report points out that if his own vaulations are correct, his golf empire would constitute "a big chunk" of his total wealth, perhaps as much as half.

The Donald valued 10 of his golf courses at more than $50 million, but Larry Hirsh, a founder of the Society of Golf Appraisers and president of Golf Property Analysts, expressed to CNBC his skepticism.

"I've valued 3,000 courses in 45 states, Canada and beyond and I can only remember one that was worth $50 million," Hirsh said. "It had four courses at an extraordinarily well known facility."

Trump was recently the subject of controversy for his comments on illegal immigration, which prompted a joint statement from the PGA Tour, USGA, LPGA and PGA of America condemning his remarks. He also became embroiled in a public back and forth with LPGA commissioner Mike Whan over the possibility - on in this case impossibility - of moving next week's RICOH British Open from Trump Turnberry.

Trump International Puerto Rico - the home of the Puerto Rico Open, played opposite the WGC at Doral - filed for bankruptcy protection earlier this month. Trump, however, does not own that property and has merely licensed his name for the club's use, as detailed extensively in this aricle from the Washington Post.