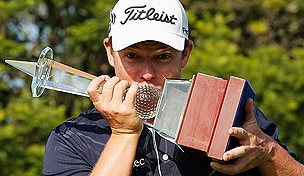 George Coetzee will have to alter his travel plans after winning the European Tour’s Joburg Open on Sunday.

Entering the week at No. 74 in the Official World Ranking, the South African needed a good week (likely top 4) to play in the upcoming WGC-Accenture Match Play Championship, which begins in two weeks in Marana, Ariz.

The top 64 available players as of Feb. 10 will comprise the field for the first World Golf Championships event of the year.

On Sunday, Coetzee closed with 66 to not only win his first European Tour title, but to clinch a spot in the Match Play. He finished at 19-under 268, three shots ahead of Tyrrell Hatton, Jin Jeong and Justin Walters.

Though his position may fluctuate based on what happens during the final round of the AT&T Pebble Beach National Pro-Am, Coetzee is expected to move into the top 60 in the world.

Even better, Coetzee also clinched a berth in this year’s British Open at Hoylake by virtue of his top-3 finish.