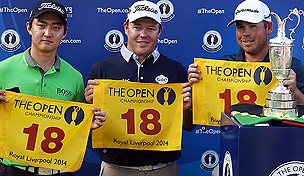 Getty Images
IRVING, TX - MAY 28: Derek Fathauer hits his tee shot on the 15th hole during Round One of the AT&T Byron Nelson at the TPC Four Seasons Resort Las Colinas on May 28, 2015 in Irving, Texas. (Photo by Scott Halleran/Getty Images)  -

Jin Jeong and Justin Walters may have finished three shots behind George Coetzee in South Africa, but both players walked away with a nice consolation prize Sunday.

The European Tour’s Joburg Open is the second event in the season-long Open Qualifying Series, which consists of 14 tournaments in nine countries on five continents.

The leading three players not otherwise exempt who finish inside the top 10 there earned a berth in the year’s third major.

Coetzee won the Joburg Open, at 19 under par, to clinch his spot. Jeong and Walters finished in a tie for second, along with Tyrrell Hatton (No. 276), but Jeong (235) and Walters (207) got the bids because they had a better world ranking at the start of the week.

These three players joined John Senden, Bryden Macpherson and Rhein Gibson, each of whom qualified for this year’s Open at Royal Liverpool by virtue of their top-5 finish at the Australian Open.

The next event in the Series is the March 6-7 qualifier in Thailand.