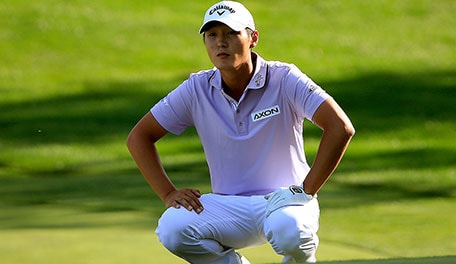 AKRON, Ohio – The summer of Danny Lee rolls right along.

Lee broke through for his maiden PGA Tour victory last month at The Greenbrier Classic, but he has hardly slowed down since. The Kiwi missed a playoff at the John Deere Classic by one shot, tied for fourth last week at the Quicken Loans National and now leads the WGC-Bridgestone Invitational after a 5-under 65 in the opening round.

Lee carded seven birdies against two bogeys, including four birdies across his opening seven holes. He has been one of the busiest men on Tour this season, teeing it up for the 31st time this week at Firestone Country Club, but he said the key to his recent success boils down to confidence.

“I don’t think there’s any doubt,” he said. “In my shots out there, I’m putting 100 percent confidence in every shot out there, and it’s been very good to me. Hopefully, I can get this thing going.”

Lee may have been an unfamiliar name to many fans before his win in West Virginia, but he is actually teeing it up for the second time in this event. The first came back in 2009 after he won the European Tour’s Johnnie Walker Classic as an 18-year-old amateur.

That week he finished T-51, and he admits his goals were a bit different six years ago.

“Back then, I was just happy shooting somewhere in the high 70s,” he said. “It was a very, very tough course for me back then, and it still is out there when your game’s not on. But it just feels a little more comfortable out here this year, this week, yeah. It’s good.”