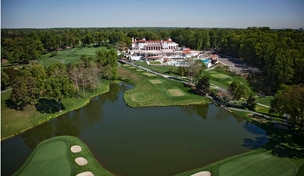 Getty Images
14 year-old Michelle Wie reacts to almost sinking the ball out of the bunker on the 9th hole during the Sony Open on January 16, 2004 at the Waialae Country Club in Honolulu, Oahu, Hawaii. (Photo by Donald Miralle/Getty Images)  -

DORAL, Fla. – It seems there will be more than just a new sponsor for Tiger Woods’ annual PGA Tour event in Bethesda, Md., in coming years.

According to a member at Congressional, at a meeting on Feb. 18 the club’s board of governors proposed bringing the event back to Congressional every other year beginning in 2016, which would require another venue, either in the Washington, D.C., area or beyond, in 2017 and ’19.

The membership vote on the proposal is due on March 31. This is the final year of the club’s contract to host the event.

In 2010 and 2011, the event moved to Aronimink near Philadelphia when Congressional’s Blue course hosted the ’11 U.S. Open. It was announced last week that Quicken Loans is set to become the event's new title sponsor as early as this year.