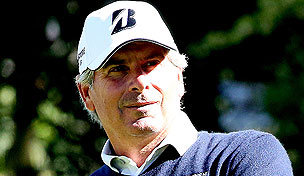 LOS ANGELES – Fred Couples could roll out of bed and walk to Riviera Country Club if he wanted.

Couples, who is practically a fixture at Riviera, estimates he lives about a mile from the course.

When he tees it up Thursday at the Northern Trust Open, it will mark the 32nd time he has played the event, more than any other player. Couples, 54, has played 30 of those events at Riviera.

“I liked it from the get-go back in 1981,” Couple said. “It's just a peaceful spot. I used to live at another house close to here, and moved away, and came back. There are great courses that people like, and there are some they don’t. I don't know why anyone would not like this course. It's just the perfect layout. It's very fair.”

Couples has won this event twice, both times at Riviera, in ’90 and ’92. He tied for seventh here just three years ago. He’s teeing it up with Jordan Spieth and Webb Simpson in the first two rounds.

“I do expect to play well, I really do,” Couples said. “It's my favorite course. I still hit the ball pretty far, and I seem to be putting well. But the greens are much faster than I'm used to, so that becomes a little bit of an issue.”