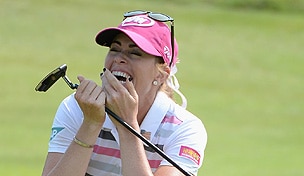 Getty Images
SAN DIEGO, CA - JANUARY 30: Dustin Johnson tees off on the 6th hole during Round 3 of the Farmers Insurance Open at Torrey Pines South on January 30, 2016 in San Diego, California. (Photo by Donald Miralle/Getty Images)  -

Creamer curled in a 75-foot, downhill eagle putt on the second playoff hole to defeat Azahara Munoz and claim the HSBC Women's Champions, her first title since winning the 2010 U.S. Women's Open.

The 27-year-old admitted after the round that her title-clinching putt was one that ordinarily might be difficult to get within six feet.

"It's one of those putts where if you just get it in that right spot, it's going to fall down," said Creamer.

The eagle capped off a day in which Creamer carded a 3-under 69 to catch and ultimately overtake Karrie Webb, who finished one shot outside the playoff.

Photos: Creamer through the years

This is Creamer's ninth career win, but her first victory since breaking through at Oakmont nearly four years ago. Since that time, she has recorded 28 top-10 finishes, including a trio of runner-up results. Creamer started her 2014 season with T-3 finishes at both the Pure Silk Bahamas LPGA Classic and the ISPS Handa Women's Australian Open.

"It's been almost three years and so much has happened," she added. "Holding that trophy, gosh, it was so nice."