Creamer pleased with progress, under par at USWO 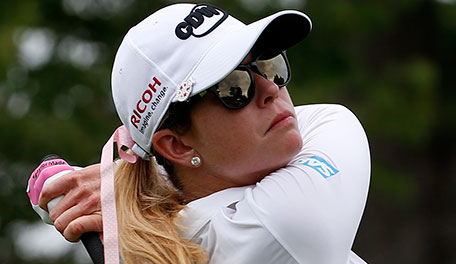 LANCASTER, Pa. – Paula Creamer is feeling good about her game again, and it showed in her solid start to the U.S. Women’s Open.

Creamer was up early Friday morning among 55 players who had to return to finish the weather-suspended first round at Lancaster Country Club. She birdied her 16th hole and closed out a 1-under-par 69, leaving her tied for 14th and three shots off the lead.

There’s good mojo for Creamer in Pennsylvania. She won the U.S. Women’s Open when it was played at Oakmont five years ago.

After a rough patch in the spring, Creamer’s swing is shaping up. She’s been refining it with long-time coach David Whelan and caddie Colin Cann. She tied for fifth at the Kingsmill Championship and tied for sixth in her last start at the Walmart NW Arkansas Championship.

“We’ve been working so hard, just trying to make things simpler,” Creamer said after completing the first round. “I understand I’m not going to hit every shot perfect, and that’s all right. I’ve been working on my short game. My putting’s really solid.”

“Golf is a marathon, it's not a sprint,” Creamer said. “Everybody has their ups and downs; it's just how you look at it. I feel like the last several months, my team, we've worked really hard on trying to get back on track with stuff. And it's not far away, that's for sure.”