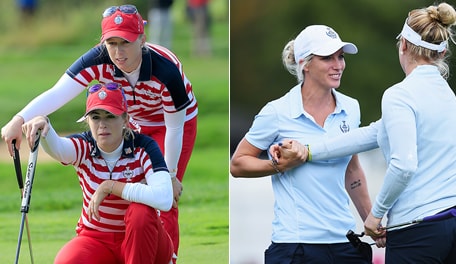 ST. LEON-ROT, Germany – American captain Juli Inkster’s bold move paid off with Paula Creamer teaming with Morgan Pressel to take down Europe’s most formidable pairing in the leadoff match in Friday’s start of the Solheim Cup.

Under intense scrutiny as a struggling captain’s pick, Creamer delivered for Inkster, proving herself worthy of the faith Inkster showed in her to lead the way with Pressel. They teamed to defeat Europe’s Suzann Pettersen and Anna Nordqvist, 3 and  2.

“I'm so proud of us,” Creamer said. “We had one job to do and that was to go out and lead us off strong, and I'm glad we did that.”

The victory helped the Americans play even with Europe, 2-2, in the opening foursomes.

Europe’s Charley Hull and Melissa Reid defeated the big-hitting American duo of Michelle Wie and Brittany Lincicome, 2 and 1. Americans Cristie Kerr and Lexi Thompson built an early 4-up lead and then had to hold off Karine Icher and Azahara Munoz for a 2-and-1 victory. Germany’s Sandra Gal made her homeland proud teaming with Catriona Matthew to defeat Stacy Lewis and Lizette Salas, 3 and 2, in the anchor match.

Inkster was so pleased with the Creamer and Pressel pairing, she sent them right back out to lead off the afternoon fourballs. They’re now 2-0-1 as Solheim Cup partners.

“It meant a lot to Paula to get out there and get a point,” Inkster said. “I was very happy with the matches. I thought our team played extremely well.”

Creamer sent a strong message getting off to a nice start in the morning, burying a 12-foot putt for par to win the first hole in foursomes, an alternate-shot format. There were so many questions about Creamer’s form with her four missed cuts entering the matches, but Creamer and Pressel never trailed in their match while defeating the highest-ranked Europeans.

“Paula made a huge putt at the first hole to draw first blood, essentially,” Pressel said. “And we just kept it going, kept the pedal down.”

Pettersen, No. 8 in the Rolex World Rankings, and Nordqvist, No. 12, never got anything going. They made two bogeys and a single birdie in the round. Pressel, No. 23 in the world, and Creamer, No. 48, combined to make three birdies and a bogey.

Hull and Reid, the English duo, never trailed against Wie and Lincicome. Hull holed a 25-footer for birdie at the 17th hole to close out that match.

Two years ago, Hull charmed American audiences as a fearless rookie in the matches in Colorado, going 2-1. She routed Creamer, 5 and 4, in singles and then asked for Creamer’s autograph.

“She puts up with me, my randomness,” Hull cracked.

Reid laughed. The 19-year-old Hull has been entertaining teammates all week.

“The stuff she talks about, I don’t know where she gets it, what part of her brain it comes from,” Reid said.

“It's hard to describe it,” Gal said. “It's just a very, very special feeling. Their joy for the game really fed into our game and hopefully that will continue, probably even more this afternoon.”