D. Johnson, Kuchar among four players under par at Doral 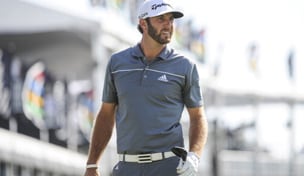 DORAL, Fla. – File this under Things That Never Happen on the PGA Tour: Dustin Johnson, Patrick Reed, Hunter Mahan and Matt Kuchar combined to post scores of 9-over par Friday – and ended the day as the four WGC-Cadillac Championship co-leaders.

“I really like the conditions here; I like it playing hard,” said Johnson, who shot a 2-over 74. “You know, being 1‑under par and tied for the lead, that says something about the conditions and also the golf course.”

Conditions were about as brutal as they get, with the elite 68-man field posting a scoring average of 76 in gusting, blustery winds.

The quartet of co-leaders are the only players under par entering the weekend.

“It was good to get in at 1‑under,” Mahan said. “One of those rounds where it could go south pretty fast so you've got to grind it out and find a way to get a number up there and get to the weekend.”

“I'm pretty pleased to be at 1‑under total for 36 holes,” added Kuchar. “You could play some decent golf and shoot 6‑over par in conditions like this. We knew it was going to be tough and had to keep grinding away, pars were good scores. Overall 2‑over in the afternoon is pleasing golf.”

Reed is seeking his third career victory in his 51st start, following a win at the Humana Challenge two months ago.

“Almost felt like we were playing at a major today,” he explained. “Just one of those things that you had to get through today and you had to grind and try to salvage every shot possible. And you know, we were able to do that and hopefully we can have a good weekend.”