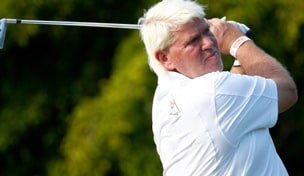 John Daly is no stranger to big scores on the PGA Tour, but Friday the two-time major champion reached a new low - or rather, high.

Thanks in large part to an octuple-bogey 12 on the 16th hole, Daly carded a 90 during the second round of the Valspar Championship, his highest round in more than two decades on the PGA Tour.

Daly hit 10 of 18 greens in regulation at the Copperhead Course, but he did not make a single birdie. Instead, Daly sprinkled his scorecard with five bogeys and three double bogeys, the third of which came on the 18th hole and secured a career-worst score. Daly's previous high was an 89 at Royal Birkdale during the second round of the 2008 British Open.

According to Shotlink data, Daly pushed his tee shot into the water on the dogleg-right, par-4 16th. His next two shots tried to cut the corner but also found the water, and Daly played back into the fairway with his seventh shot. After missing the green with his approach, he needed two chips to find the green before two-putting for a 12.

Entering this week, Daly had made two cuts in four starts this season. His best result was a T-32 finish at the Sony Open in January, and he tied for 49th last week in Puerto Rico.

At 22-over 164, Daly is 11 shots worse than the next player in this week's field. The round also extends a dubious streak for the 47-year-old, as Daly has now carded at least one tournament round of 80 or higher every year since 1991.

Some of Daly's previous high scores include an 88 at the 1986 U.S. Open, his first round on the PGA Tour; an 87 at Bay Hill during the 2000 Arnold Palmer Invitational; and an 88 at the 2009 Buick Open. Two years ago at the Shriners Hospitals for Children Open, Daly played his way onto the leaderboard with a second-round 63, only to follow it with an 86 the next day.