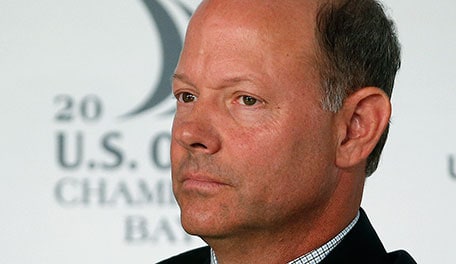 LANCASTER, Pa. – The USGA isn’t sure what to do about its plans to play the U.S. Women’s Open at Trump National in Bedminster, N.J., in 2017 with Donald Trump under fire over controversial remarks he made about Mexican immigration.

“I can’t speak for the other golf organizations, but I can for the USGA say that we have not wanted to get involved in politics, presidential politics, but at the same time we are about diversity, about inclusion, about growing the game,” USGA executive director Mike Davis said Thursday at the U.S. Women’s Open. “We are evaluating things, and at this point that’s all we can say.”

The PGA of America announced Wednesday that it met with Trump and they mutually agreed not to hold the Grand Slam of Golf at Trump National Golf Club in Los Angeles Oct. 19-21.

The LPGA released a statement Wednesday saying the Ricoh Women’s British Open would go on as staged at Trump Turnberry in three weeks given “a change in venue for this prestigious major simply isn’t feasible without significantly diminishing the event.”

The PGA Tour, PGA of America, USGA and LPGA released a joint statement earlier this week saying Trump’s views don’t reflect the views of their organizations.

About staging the U.S. Women’s Open at Trump National in New Jersey, Davis said: “It’s a complicated matter, and we want to get it right. The key is, we want golf to be very welcoming and open. Anything that hurts that is not good.”