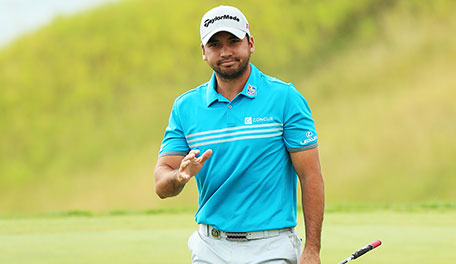 SHEBOYGAN, Wis. – This is not the same player who essentially began his major championship career here at Whistling Straits five years ago.

It was at the 2010 PGA Championship where Jason Day first tasted major pressure when he began the final round just four strokes back, but made a double bogey-6 on the ninth hole on Sunday and never recovered.

But this time the Australian is smarter, not to mention stronger and straighter, as evidenced by his reaction after making bogey at the shot par-4 sixth hole.

“It's the start of the week. Can't really panic too much. Plenty of golf left,” Day said after an opening 68 left him tied for second place, two shots behind front-runner Dustin Johnson. “If I made a mistake early, I knew that there were opportunities coming in.”

It’s also telling that five years later, Day has also learned how to take a more aggressive approach at the biggest events. At the par-5 second hole, for example, Day hit iron off the tee in 2010, but he went with driver on Thursday to take advantage of his length, and he made eagle there on Day 1.

“He’s a different player since the last time he was here,” said Colin Swatton, Day’s caddie and swing coach. “He has more confidence with his driver and feels more comfortable with it, so we’ve made small tweaks to the game plan to be more aggressive.”