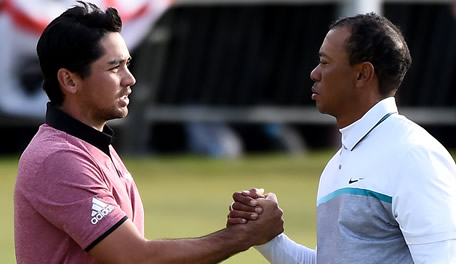 Day had just completed his second round, a 1-under 71 that left him tied for fourth place at 7 under par, after enduring more than 13 hours of weather delays caused by rain on Friday and winds that gusted to 40 mph on Saturday at the Open Championship.

Day will begin the third round inside the top 15 for the fourth consecutive major, including last month’s U.S. Open where he tied for ninth after battling the effects of benign positional vertigo, as he continues to vie for his first Grand Slam title.

“It's just slow steps. We're going to have slightly easier conditions tomorrow,” Day said. “There's definitely going to be a lot more opportunities, so I would say there's going to be a lot more guys moving up the leaderboard quicker. We've got 36 holes left. It felt like Sunday out there today how much I was grinding it.”

Late Saturday afternoon as he was finally completing his weather-delayed second round, Tiger Woods, who was grouped with Day, offered the Australian a bit of unsolicited suggestion.