Day helps injured caddie out of bunker at Oakmont 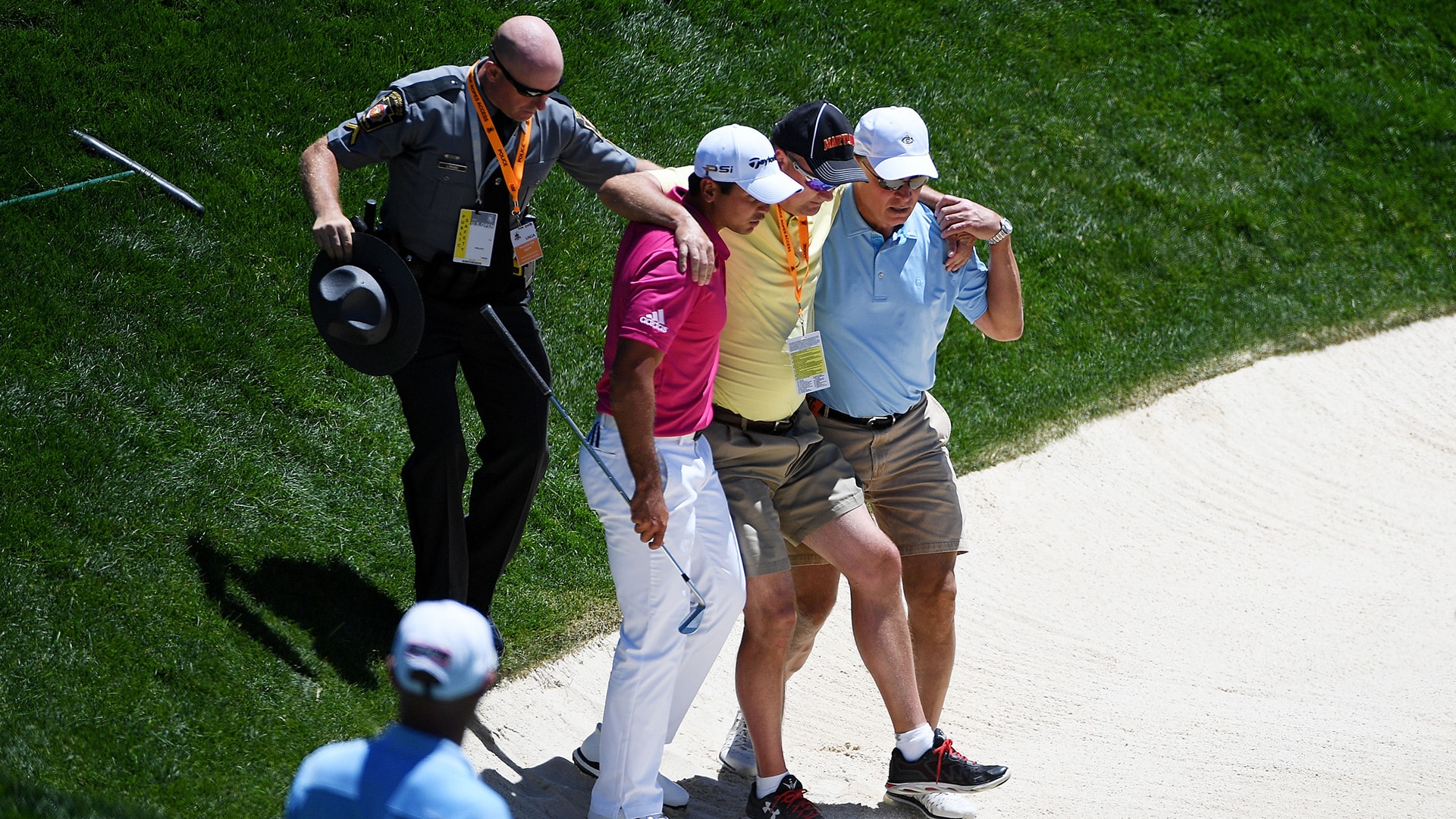 OAKMONT, Pa. – Seems Oakmont is more than just a brutal venue for the players – even the caddies are taking a beating.

Amateur Chris Crawford, who advanced to the U.S. Open through both stages of qualifying, watched as his looper, Bill Henaghan, was carted off the course Tuesday after suffering what appeared to be a broken left ankle.

The grass surrounding the greenside bunker on the sixth hole had recently been watered when Henaghan made his way along the side of the slope. His left leg gave out, and he slid down into the back of the bunker as Jason Day, one of the other players in the group, was preparing to play a shot.

“He actually handled it incredibly well,” Crawford said as he made the turn during their practice round. “He just sat there, like, ‘I’m fine, I’m fine. It’s broken, but I’m fine.’”

Day walked over to Henaghan, lifted him onto one of his shoulders and began to help him out of the bunker.

Eventually, Henaghan was evaluated by Pittsburgh Steelers team doctor Jim Bradley – who was walking along with the group, as a friend of Day’s manager Bud Martin – carried off by a pair of police officers and stabilized on a cart. Bradley said Henaghan was taken to UPMC St. Margaret hospital in Pittsburgh.

“He was a little fainty,” Bradley said. “The guy just broke his ankle. It was pretty obvious what had happened.”

Oddly enough, it’s not the first time that Henaghan had been injured while carrying the bag for Crawford in a tournament. At the 2011 U.S. Amateur at Erin Hills, Henaghan looped for the entire tournament but complained of discomfort in his right shoulder. He was later diagnosed with a torn rotator cuff.

When asked whether Henaghan – a lifelong family friend – should hang up his caddie bib for good, Crawford laughed and said: “You can tell him that.”

Rather than carry his own Drexel stand bag for the last few holes Tuesday, Crawford called on his swing coach, Dom DiJulia. The incident called to mind what happened last year, when the caddies for Henrik Stenson and Stephen Gallacher suffered leg and wrist injuries after they slipped on the baked-out turf at Chambers Bay.

Crawford, 22, was one of the best stories to emerge from qualifying. Vying for one of the six available spots at the Summit, N.J., sectional, he canned a 40-footer on the final green to punch his ticket to Oakmont, about five hours from his hometown of Bensalem, Pa., just north of Philadelphia.

His caddie that week, Ben Feld, isn’t here at the U.S. Open, at least not yet. Feld lost Tuesday afternoon in the quarterfinals of the Philadelphia Amateur, held at 2013 U.S. Open venue Merion. But Crawford said his new looper – his third this week – will be here in time for his first-round tee time Thursday, as will plenty of friends and family who will make the drive over from Philadelphia.

“There’s not really a better Open for me,” he said. “This is as good as it gets.”