Day, once again, in position for first major win 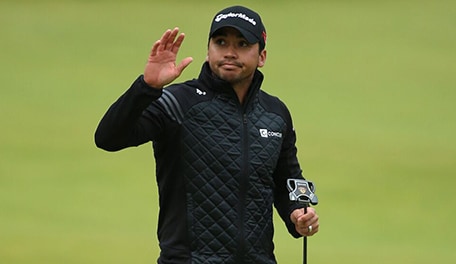 ST. ANDREWS, Scotland – Jason Day has been here before.

He began last month’s U.S. Open tied for the lead. He was two back to start the final day at the 2013 Masters. He trailed by four after 54 holes at Augusta National in 2011.

Each time the Australian came up short, sometimes agonizingly so like at Chambers Bay, where the lingering effects of benign positional vertigo caught up with him on Sunday on his way to a tie for ninth. With each experience, however, Day has tried to learn from the moment.

“I think I need to just embrace it more,” said Day, who will head out in Monday’s penultimate group tied for the lead at the Open Championship.

“It’s hard to stay in the present in situations like this. It's hard to not get out in front of yourself. That's one key that I'm going to try and do the best I can, really just kind of focus on myself.”

Day entered the familiar fray with a third-round 67 to match Louis Oosthuizen and Irish amateur Paul Dunne at 12 under par with Monday’s finish looming at St. Andrews.

While his solid play this week, as well as his medication that has helped treat the symptoms of vertigo, has been encouraging, it is the near-misses, particularly at Chambers Bay, that have become the guide for Day as he continues his pursuit of a major title.

“He’s just a little more comfortable. Today he was very, very composed. He was much, much slower more then anything,” said Colin Swatton, Day’s swing coach and caddie.