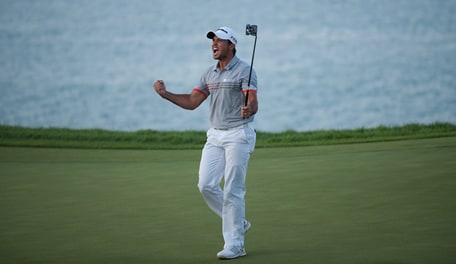 SHEBOYGAN, Wis. – Jason Day’s round was heading in a familiar direction late Saturday afternoon at the PGA Championship.

In contention at a major championship for the third time this season, Day played his first eight holes in 1 under and was three strokes out of the lead when he calmly rolled in a 12-foot birdie putt at the ninth.

He calmly added another at the 10th and an eagle, which included a pitching wedge second shot at the 563-yard par-5 11th hole, to inch his way back into the lead.

In fact, the only time he wasn’t calm was when he charged in a 25-footer for birdie at the 17th hole after a bad break cost him a chance at birdie at the par-5 16th.

It’s a lesson Day has come by honestly, having come so close in major championships before, including this year’s U.S. Open and Open Championship. It’s also why he appeared so relaxed heading into another major Sunday in contention.

“A number of things can happen, especially on a final round of a major championship,” said Day, who needed just 24 putts in Round 3. “I've done all the hard work right now to get into contention, to have this lead. So tomorrow I just need to be patient with myself.”