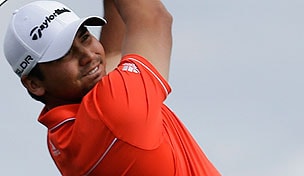 Getty Images
SHANGHAI, CHINA - NOVEMBER 08: Russell Knox of Scotland and his wife Andrea Knox with the winners trophy after the final round of the WGC - HSBC Champions at the Sheshan International Golf Club on November 8, 2015 in Shanghai, China. (Photo by Ross Kinnaird/Getty Images)  -

DORAL, Fla. – Jason Day withdrew from the WGC-Cadillac Championship before teeing off in the first round on Thursday with an ailing left thumb.

Day, who won last month’s WGC-Accenture Match Play Championship, said in a statement that his thumb began bothering him at the Match Play and the pain continued this week in South Florida.

Day had a MRI on Wednesday in Miami and the results showed no damage.

“The doctor prescribed rest if I was unable to play today. My plan is to rest for a couple of weeks,” said Day, who was not scheduled to play next week’s event in Tampa, Fla.

There are no alternates in the World Golf Championship and Day was not replaced in the field.