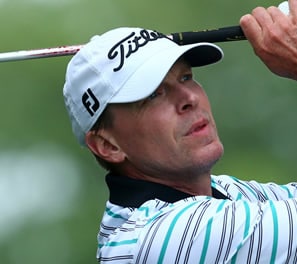 SILVIS, Ill. - Steve Stricker and Zach Johnson are in the early mix at the John Deere Classic.

Stricker, the 48-year-old, three-time champion, turned in his best round of the year Thursday, a 6-under 65 that has him just two shots off the early lead. He made four birdies on each side, with his only dropped shots coming in succession, on his eighth and ninth holes of the day.

Since 2009, the year he won the first of his three straight titles, Stricker is a combined 121 under with a 66.16 scoring average at TPC Deere Run. Both of those numbers are the lowest anyone has gone at the Deere over that span.

"Yeah, this is a nice place for me," said Stricker, the PGA Tour part-timer whose trying to find his game after undergoing back surgery in December. "I go here with such good feelings and remember some of the great shots and hole-outs that I'vve had over the years. It was a good place for me to come."

Speaking of hole-outs, Johnson made one of his five birdies in a bogey-free 66 thanks to jarred shot from the greenside bunker on the par-4 eighth. If there's anyone with as much of a claim to the Deere as Stricker, it's Johnson, who won in 2013, hasn't finished worse than a tie for third in the last four years, and is on the tournament board of directors. Go figure, since 2009, he's a combined 110 under here - second only to Stricker. Thursday marked his 25th consecutive round in the 60s at Deere Run.

"I hope I'm getting an invite well into my 50s before that [streak] ends," Johnson said, "but I've got to gather that's probably not going to be the case. I mean, I enjoy it. I'm confortable here, as I keep saying. I love everything about what this course demands requires, and I love the greens. It's pretty simple."