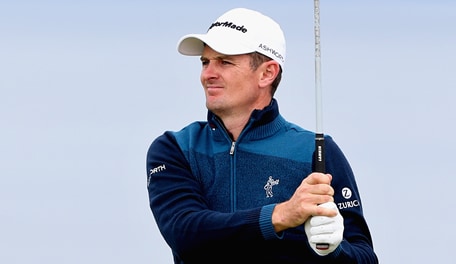 Justin Rose isn't ready to give up the trophy at the Scottish Open.

After capturing the title last year at Royal Aberdeen, the Englishman is again in contention at the halfway point in Scotland. Rose has carded back-to-back rounds of 4-under 66 at Gullane Golf Club, giving him a share of the lead upon completing his second round with the afternoon wave still yet to complete play. (Note: He finished three back of 36-hole leader Daniel Brooks)

Rose has been consistent from tee-to-green through 36 holes, missing only three greens in regulation. After opening his second round with a bogey, Rose reeled off five birdies in a seven-hole stretch from Nos. 2-8 to make a quick move up the standings. The fireworks ended on No. 8, though, as he closed out his round with 10 consecutive pars to join Shane Lowry and Johan Carlsson in the clubhouse at 8-under 132.

Rose won earlier this year at the Zurich Classic on the PGA Tour, and he lost in a playoff last month at the Memorial. He is making his first worldwide start since the U.S. Open, where he finished T-27.

Rose followed his Scottish Open title with a T-23 finish at the Open Championship last year at Royal Liverpool, but his record in the season's third major is less than stellar. Rose has made the cut only twice in the last five years, and while he finished T-4 as an amateur at Royal Birkdale in 1998, his best result as a professional came in 2007 at Carnoustie, when he finished T-12.