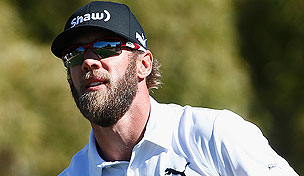 HUMBLE, Texas – The pain in Graham DeLaet’s lower back and right leg was so unbearable that he couldn’t sit still for more than 10 seconds at a time. He lost sensation in a few toes. His quality of life became more pressing than his golf game.

“It was the worst pain in my life,” he says now.

And three years ago, Graham DeLaet underwent the same back surgery – a microdiscectomy, for a pinched nerve – that Tiger Woods had earlier this week.

No two surgeries are alike, of course, but DeLaet didn’t hit balls for four months (and even that was too soon), he needed a year to fully recover, and even now he concedes, “I’m not sure I’ll ever be 100 percent again.”

To be clear, DeLaet hasn’t examined Woods’ MRI. He doesn’t know the discomfort he was experiencing. But, DeLaet says, “if he had the same surgery I had, then I’m sure he was dealing with the same symptoms I had.”

DeLaet has dealt with back pain for much of his career, but it came to a head during the 2010 season, his rookie year on Tour. Fighting to keep his card, he continued to play despite shooting pain down his right side. The discomfort would flare up and subside, never on schedule, making it difficult to anticipate when the next episode would come. His herniated disk was “the worst my doctor and physiotherapist had ever seen,” DeLaet said.

“When the pain was at its worst,” he said, “golf was the last thing on my mind. I just wanted to live a regular life. I wanted to be able to play catch with my kids.”

After surgery, the first chunk of DeLaet’s rehab was simply walking – around the block, then a few spins, then up to 4-5 miles per day.

DeLaet didn’t begin chipping and putting for three months; Woods said Tuesday that he hoped to begin doing that in three weeks.

DeLaet didn’t hit full shots until four months after surgery; Woods seemed to indicate that his timetable would be drastically shorter.

DeLaet didn’t play a tournament until the six-month point, when he teed it up in three events in June. It was apparent then that he’d rushed back too soon, and he ended up shutting it down for the rest of the year, returning to competition at the Sony Open the following January. Though DeLaet played a full schedule in 2012, he never felt strong or competitive. On many shots he flinched at impact to protect his back, a move that resulted in a high flare to the right.

“They always say not to come back until you’re ready,” DeLaet said, “but everybody does. We’re all competitors. We want to compete. But you have to listen to your body.”

Woods seems to be doing that this time, going under the knife and sitting out the Masters for the first time since 1994. It was a difficult decision at a critical juncture in his career – coming off a five-win campaign, in a dead heat with the ghost of Jack Nicklaus (age-38 season, 64 major starts as a pro, 14 majors won).

The world No. 1 did not specify when he hoped to return to competition, saying only that his goal was to be back on Tour “sometime this summer.” That could mean any time, really – after The Players, after the U.S. Open, after major season, after the Ryder Cup. Already he has alluded to the fact that he will need to skip “several upcoming tournaments.”

But the 32-year-old Canadian – who was 10 years younger than Woods when he underwent the procedure – provides a window into what Woods can expect upon his return. Tiger’s days of intense weightlifting likely are done – DeLaet says he works “really hard” in the gym just to lessen the lingering effects. Woods’ swing might even need to be altered.

Not to go all WebMD on you, but DeLaet thinks his back issues were prompted by a lack of mobility in his hips and thoracic spine. Those weaknesses put undue torque on his lower back.

Now, even before doing such everyday tasks as looking under his car, DeLaet is conscious about setting his abdominal muscles before he moves, lest he tweak something.

Which means it is possible that Tiger won’t, either.