Despite weather, Harman cards 30 on inward half 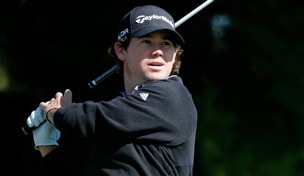 ST. SIMONS ISLAND, Ga. – Through five holes amid blustery conditions, Brian Harman could feel his second round at the McGladrey Classic getting away from him.

“It was going off the rails quick. We really hadn’t even found the club face,” explained Harman, who played his first five holes Friday morning in 4 over.

After a mid-round pep talk from his caddie, though, Harman bounced back remarkably well on the Seaside Course, firing a 5-under 30 on his inward half and closing his round with four birdies across his final five holes.

“He just told me that it’s going to be really tough for everybody, so just settle down,” said Harman, who capped his round with a chip-in birdie from in front of the green on No. 9. “I guess all my bogeys just came on the start.”

It all added up to a 2-under 68 for the University of Georgia grad, whose 5-under 135 total left him two shots off the pace upon completion of his round Friday morning.

A resident of Sea Island for the past four years, Harman has played the Seaside Course in a variety of conditions. Friday’s winds, though – with gusts in excess of 30 miles per hour – were still largely unfamiliar.

“It doesn’t ever really blow like this. This is just a freak day,” he added. “On days like today, you’ve just got to kind of try to survive and hope you can make a few putts.”