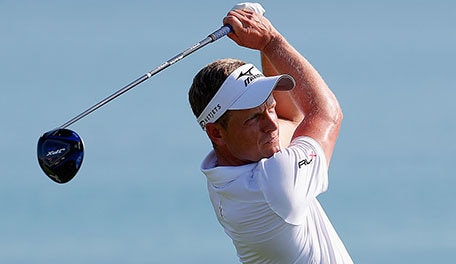 GREENSBORO, N.C. – Luke Donald couldn't help but toss out a little sarcasm when he was reminded of his current spot in the FedEx Cup standings.

The former world No. 1 is No. 124 in FedEx Cup points, and after this week the top 125 move on to the first event of the playoffs at The Barclays.

Yes, there is some pressure on Donald to play well at the Wyndham Championship, where he is making his fourth start at the event but first at Sedgefield C.C., but he's not focusing on the what-if scenarios that might mean an early end to his season.

"It's just another opportunity for me to improve my position in the FedEx Cup," Donald said. "My game has certainly been trending in the right direction. I feel like I'm starting to see a lot more consistency in my golf and in my scores."

Donald only has two top-10s in 17 events this season, but he's more comfortable with his swing since returning to his coach, Pat Goss,after a stint with Chuck Cook.

"Some guys’ cards are on the line. That's a lot of pressure to play under," Donald said. "I'm exempt through next year, so there's no worry about even if I don't have a good tournament ... it's not the end of the world."