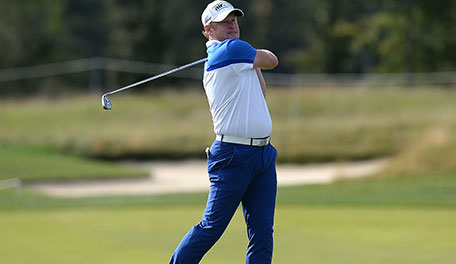 A late entry into the event, Donaldson shot a final-round 68 to overtake third-round leader Bradley Dredge and capture his first European Tour title of the season and third of his career.

Good timing too, for Donaldson needed a top-7 finish this week to guarantee himself a spot in next month’s trip to Gleneagles.

“It was a lot on the line; I knew I had to play well,” he said. “This week I played really well, and it all came together.”

Donaldson’s victory leaves Graeme McDowell in the ninth spot heading into the final week of qualifying. The Italian Open (European Tour) and Deutsche Bank Championship (PGA Tour) are the last opportunities for Ryder Cup hopefuls to play their way into the team, though the latter event awards more world-ranking points and thus will create more volatility.

McDowell has already said that he’ll skip the event in Boston to be with his wife as the couple expects their first child. Luke Donald and Ian Poulter both missed the 36-hole cut at the playoff-opening Barclays, while Lee Westwood needed to finish T-49 or better to advance to the second playoff event. (He was tied for 68th while playing his fourth round.) Other players vying for a spot include Stephen Gallacher – the Scotsman who finished T-7 in Prague – and 50-year-old Miguel Angel Jimenez.

Donaldson left little to chance, finishing at 14-under 274, two clear of Dredge, to win for the third time in as many years.

“It’s so difficult to get onto the team, with everybody playing so well,” he said. “I played as well as I can play for 18 months, and a couple of low events and you just rocket down. It’s great to play so well and do enough to get on the team.”