Looks can be deceiving: Whistling a links course? 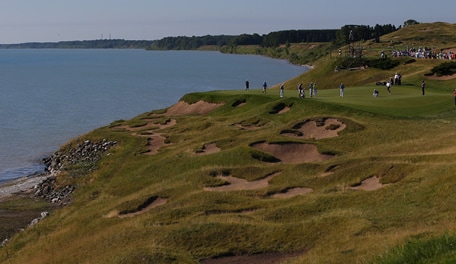 SHEBOYGAN, Wis. – It’s been said that Whistling Straits is the third consecutive links-style golf course to host a men’s major championship. At least that’s what one questioner keeps declaring in his offerings to players during PGA Championship news conferences.

The players, however, have a different assessment.

“The only thing that's linksy is the fact that you see water and there's some fescue grasses out there. But it's really target golf right now; the ball is not running,” Justin Rose said. “So the mindset –  the visual is links, but the mindset is target golf.”

That mindset is heightened with softer conditions. Thunderstorms led to several suspensions of play during Monday’s practice round at Whistling Straits, taking a bite out of the course.

“It’s a little soft with the rain we had yesterday,” Tiger Woods said. “But, I think it’s playing great. The greens are absolutely perfect. They’re such a great speed and so smooth. I know they’ll probably get a little bit quicker come Thursday, but overall this golf course is in perfect shape right now.”

The U.S. Open was contested at a crusty Chambers Bay. The Open Championship was held on the Old Course at St. Andrews. As Rickie Fowler said, Whistling Straits “definitely has the look of a links golf course, but doesn't play completely firm and fast like a links golf course.”

Zach Johnson, winner of the claret jug four weeks ago, took it a step further.

“I think this golf course is the furthest thing from links,” he said. “Links golf is using the land, using trajectory control, running things on the green, using the bounces and the rolls. This course is all aerial. You have to hit it here to hit it there. It may look like links standing from the clubhouse looking down, but it does not play like a true links course.

“In my opinion, outside of maybe the sand traps and the way they look, it's not a links golf course.”

Speaking of the bunkers …

That has been a major topic of conversation early this week, given the Dustin Johnson incident five years ago. The PGA of America issued a rules statement declaring just about everything on the property with sand a hazard. Players have taken notice.

“There was a lot of paperwork last time, but there is more this time. Everybody has it on their mind, as much as the media is talking about it,” said Bubba Watson, who lost in a playoff at Whistling Straits in 2010. “We have it on our mind, but the goal is to hit the fairway.”

“I believe that this year everything is a bunker,” Woods said. “But this golf course is what it is. We’ve got to put the ball in play. If you stay away from (those) areas you’ll be fine.”