Dye: Man Behind the HOF architecture 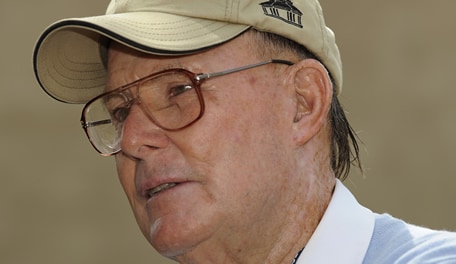 Is it possible for a golf course to personify its creator?

At times irascible and contradictory.

And yet, stunningly beautiful.

If the Straits Course at Whistling Straits is a physical manifestation of Pete Dye then it is the perfect reflection of his iconic and fierce individualism.

For all we think we know about Dye, he possesses a certain mystical Hoganesque quality, a sense that, despite the 89 years he’s walked this earth, the origins of his becoming arguably the most influential golf course architect of the last 50 years is lost among the sands of time.

Fact is, Dye took a path into the game as undulating as his fairways. He won the Ohio State High School Championship before joining the United States Army and the 82nd Airborne Division during World War II. Once home, Dye started out in Indianapolis as an insurance salesman, quickly becoming a star performer. During this time he continued to hone his game, winning the 1958 Indiana State Amateur Championship, after runner-up finishes the prior two years. He also won the Indianapolis District Championship and played in five USGA Amateurs and the British Amateur. Perhaps his most impressive feat was qualifying for the 1957 U.S. Open at the Inverness Club, where he finished in front of both Arnold Palmer and first-time U.S. Open participant Jack Nicklaus.

Dye’s career path was set when he made the decision to become a golf course architect in his mid-30’s. After some early design efforts, his passion was fueled and his future design philosophies were entrenched after a 1963 trip to Scotland’s famed links instilled a love for pot bunkers, perplexing greens, rolling fairways and the use of wood facings to shore up designs.

Today, Dye is not only a member of the World Golf Hall of Fame, but he has more than 100 courses to his credit, many of which have hosted golf’s most prestigious events, including the 2015 PGA Championship.

Sometimes the difference between being bold and extraordinary or commonplace and mediocre is choosing to take a chance and setting your own path, whether with a golf course or in life.