Early starters get big break in Round 1 of PGA 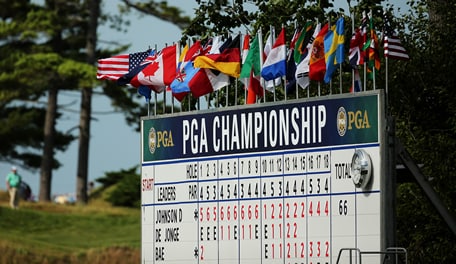 SHEBOYGAN, Wis. – The early starters had a clear advantage Thursday at the PGA Championship.

Leader Dustin Johnson played most of his round on a soft course with a gentle breeze. The wind freshened as he finished his opening 66, but it was consistently blowing 20 mph as the afternoon wave got underway.

Memorial champion David Lingmerth posted the best round of the afternoon, a 67 that included only one bogey. Scott Piercy (68) had the next-best score among the late starters.

“Until the last 30 minutes, it was pretty darn tough,” Lingmerth said. “The course is tough to begin with. You’ve really got to pay attention to every shot you hit out there, and with the wind it just makes it so much harder. So you get tired out there. It’s a lot of work.”

As Jordan Spieth prepared for his tee time at 1:10 p.m. local time, he realized he had little chance of matching Johnson’s red-hot start.

“We knew that was probably not feasible for us, minus a few breaks,” Spieth said. “It was a different golf course, and we needed to adjust our expectations because of that.”

There likely won’t be such a disparity during Friday’s second round. The forecast calls for partly-cloudy skies with a chance of late-afternoon thunderstorms, but the wind is expected to remain between 5-10 mph.