Els gets lucky bounce in win over Rose 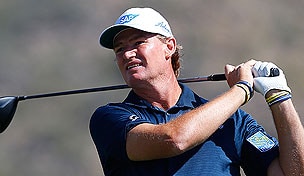 Although he cherishes the format every two years at the Presidents Cup, his record at the WGC-Accenture Match Play Championship is less than stellar. The South African hasn’t made it to Friday at Dove Mountain since 2009, and after a scrappy first-round victory he wasn’t planning too far ahead.

Turns out all he needed was a little luck.

After he and Justin Rose took their match to extra holes on Thursday, Els looked done in again when his second shot at the 20th hole nestled into a downhill lie left of the green.

“The bunker is in front of me, the hill in front of me,” said Els, who won the match on the second extra hole. “It hit the bank and it just trickled over to about 4 feet. It was an impossible shot, but it was obviously the right one at the right time.”

As for the match play format, it seems to be growing on Els.

“I don’t know if I can say I enjoy it. But it’s a different experience,” he said. “In this tournament I haven’t done that well. Hopefully, I can go further in the tournament now.”