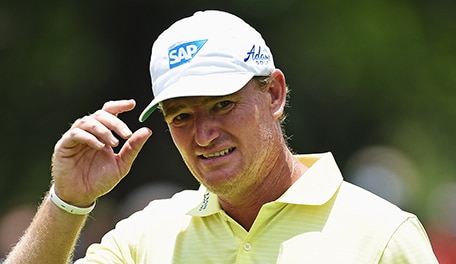 Ernie Els was named the recipient of the Payne Stewart Award, annually rewarded by the PGA Tour and Southern Company to a professional player who “best exemplifies Stewart’s steadfast values of character, charity and sportsmanship.”

Els’ philanthropic endeavors include improving the lives of those with autism spectrum disorder as well as development of junior golf talent in his native South Africa.

“It’s an unbelievable honor,” Els said Wednesday when the announcement was made on “Morning Drive." “It’s very easy for us to start giving back, because the PGA Tour is a very charitable organization. We learn quickly what charity is all about. And stuff that is dear to our heart, we want to make better.”

The Els Center of Excellence was opened on Monday in Jupiter, Fla., to serve local and national autism communities. There is also the Els for Autism Foundation, which was established in 2009, shortly after Ernie and Liezl Els’ son, Ben, now 12, was diagnosed with autism.

Els is a World Golf Hall of Fame member, four-time major champion and 19-time PGA Tour winner. The award is named after fellow Hall of Famer Stewart, who died in a plane accident in 1999.

“I have so many fond memories of Payne and always had the greatest respect for him as a golfer and as a person, and I think this award is a wonderful way to honor his memory and the values that he stood for,” Els said in a statement. “To be considered worthy of receiving such an award makes me feel proud and very humble. It really means a lot."

As part of the award, Els will receive $300,000 which he can donate to the charity of his choice.

“He’s a great sportsman, beloved on the Tour,” said Southern Company CEO Thomas Fanning. “But, I think it’s the fact that (he’s) given back to society, particularly in the area of autism … this is a guy who has clearly given more than he’s taken.”

Els will be honored Sept. 22, the Tuesday of Tour Championship week.