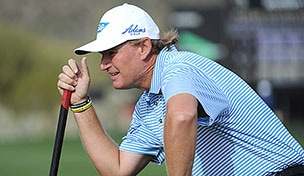 Getty Images
LAS VEGAS, NV - OCTOBER 25: William McGirt reacts after missing a putt for birdie on the 18th green during the final round of the Shriners Hospitals For Children Open on October 25, 2015 at TPC Summerlin in Las Vegas, Nevada. (Photo by Cliff Hawkins/Getty Images)  -

MARANA, Ariz. – Ernie Els’ road to the Elite Eight at the WGC-Accenture Match Play Championship is every bit the road less traveled.

In 57 holes the Big Easy is 5 over par and has been pushed to extra holes twice in three days to advance to the quarterfinals for the first time since 2009.

“I make it tough for the other guy. He feels like he should put me away, but I’m just hanging on,” Els said. “Yesterday against Justin (Rose) I made some pretty cool par saving putts and he made some mistakes. I’ve been playing a little C golf and hanging in there.”

The putter has been the key for Els this week, and even that has been an interesting journey.

After practicing with a non-anchored putter (37-inch shaft) during the off-season, the South African ditched his belly putter on the weekend at the Qatar Masters for the shorter version and also used it on Thursday and Friday before missing the cut in Dubai.

At last week’s Northern Trust Open he reverted back to the belly putter on Days 1 and 2 – needing 28 and 30 putts, respectively – before going back to the short model on the weekend and taking 25 and 26 putts on Saturday and Sunday.

The short putter has been in play all three days at Dove Mountain.