AUGUSTA, Ga. – Under darkening skies, Ben Crenshaw made his final walk up Augusta National’s 18th hole on Friday at the Masters.

The two-time champion played his 44th and final Masters this week, missing the cut after rounds of 91-85, but he was cheered every step of the way regardless of his score.

“I feel like I’ve won the tournament. The people, I will never forget that as long as I live,” he said. “People have a great affection for the people who’ve won here. You can feel it.”

Crenshaw’s wife, Julie, and their three daughters were waiting for Crenshaw behind the 18th green along with Nick Price, Morgan Hoffmann and defending champion Bubba Watson.

The most emotional embrace, however, was with Carl Jackson, Crenshaw’s caddie for 38 years, who was not able to work this week because of swollen ribs. Jackson’s brother, Bud, caddied for Crenshaw on Thursday and Friday.

“On a scale of one to 100 it was a 100,” Jackson said when asked how emotional it was to see Crenshaw make his final Masters appearance. “It’s a respectful day, nothing sad about it.”

Crenshaw, 63, won his two Masters a decade apart, first in 1984 and again in 1995 in what was an emotional triumph just days after his swing coach Harvey Penick died.

Although Crenshaw wasn’t happy with his play, there were a number of highlights during the round including a surreal moment on the 12th green when a red-tailed hawk landed adjacent the putting surface.

“[Jason Dufner who was paired with Crenshaw] said, ‘Ben Hogan’s watching, you better make that putt,’” Crenshaw smiled. “Of course, I choked. But it was surreal and that’s kind of the way this place is.”

Crenshaw said he will continue to participate in the annual Par 3 Contest and that it would be “wonderful” if he were asked to someday serve as one of Thursday’s honorary starters. 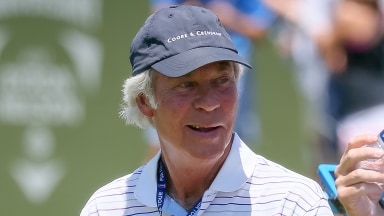 Despite a soggy conclusion, co-designer Ben Crenshaw is pleased with how his handiwork stood up against the field at the AT&T Byron Nelson. 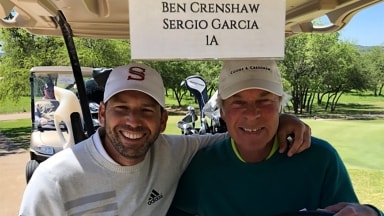