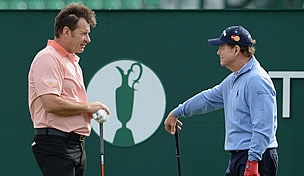 The RBC Heritage added a pair of Hall of Famers to its roster of confirmed players Wednesday, announcing that Nick Faldo and Tom Watson will tee it up next month on Hilton Head Island.

Faldo notched his first PGA Tour victory at this event in 1984, but hasn't played a U.S.-based tournament on the main circuit since becoming lead analyst for CBS Sports in 2006. The Englishman has limited his PGA Tour participation in recent years to the British Open, an event he won three times and one where he has missed the cut in each of his four starts since 2007, including last year.

Faldo, 56, made his first Champions Tour start on U.S. soil last October, although an arm injury caused him to withdraw during the first round of the SAS Championship. He made his first start of 2014 last week at the Mississippi Gulf Resort Classic, where he tied for 53rd.

Watson, who won at Harbour Town in 1979 and 1982, is returning to the shores of South Carolina for the first time since 2001. The 64-year-old, who will captain the U.S. Ryder Cup team this September, made four starts on the PGA Tour last year, including a tie for 38th at the Greenbrier Classic.

The tournament will be played April 17-20. Graeme McDowell is defending champion, having defeated Webb Simpson in a playoff last year.