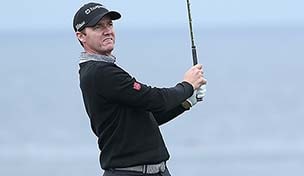 Getty Images
Rory McIlroy of Northern Ireland hits his 2nd shot on the 11th hole during the First Round of the Dubai Duty Free Irish Open Hosted by the Rory Foundation at Royal County Down Golf Club on May 28, 2015 in Newcastle, Northern Ireland. (Photo by Andrew Redington/Getty Images)  -

Red-hot Jimmy Walker will be grouped with Jason Dufner and Keegan Bradley when the Northern Trust Open gets underway Thursday at Riviera.

Walker has won three of his eight starts in the new wraparound season, including last week’s one-shot victory at Pebble Beach. The 35-year-old is a virtual lock for the Ryder Cup team, one that certainly is on the minds of both Dufner, the 2013 PGA champion, and Bradley, one of the most electric players at the 2012 event.

Dufner is making his first start on the West Coast swing – he hasn’t played since a T-29 at the Sony Open. Bradley, meanwhile, is back on Tour after a one-week break. In his last start, at the Phoenix Open, he blew up with a second-round 80 and missed the cut. Prior to that event, he had finished in the top 20 in 11 of his last 13 starts.

Walker and Bradley, at least, have strong records at Riviera.

Walker has finished in the top 16 in his last three appearances, while Bradley lost in a playoff here in 2012 and chased that start with a T-16 a year ago. Dufner hasn’t finished better than 29th in four career starts, with two missed cuts.