Feherty: Letter I wish I wrote to my father, before Alzheimer's My father turned 91 a couple weeks ago, and it has been almost two years since the last time he recognized his only son. Alzheimer’s has stolen him from me.

I think Alzheimer’s is worse than death, because at least dead people aren’t around any more. The vehicle my father used to move around this world freewheels on down the road, but the man behind the wheel is nowhere to be found except in the memories of those who loved him.

I want to remember who my dad was, and not what he has become. I remember him racing me up the steps at Ward Park on the way home from church, and never letting me win until the day I did. I remember how loud he sang in church, and how embarrassed I was because of it. I remember the smell of the whiskey on his breath and the rasp of the stubble on his chin as he kissed me goodnight and told me how proud of me he was, every night, and I remember pretending to be asleep, every time.

I remember his godawful golf swing – the hideous flat agricultural swipe it was, and I remember when he came to watch me play golf, and how badly I wanted to play well for him. I remember when I was 17 years old with a 5 handicap and I told him I wanted to turn pro. He told me that day that “no matter what I chose to do, I was going to be great at it.”

To this day I have no idea why he thought that, although it does occur to me now that he might already have been somewhat delusional. I remember his borderline idiotic optimism, despite how much I sucked in those early years, and the obvious joy he felt when I finally didn’t, and the return of the aforementioned optimism when 20 years later I sucked again. And then there was television, and my wife Anita, both of whom he felt were lucky to have me.

I miss my dad, and I wish I’d recognized earlier that he was slipping away from me. This Father’s Day, I wish I had one more chance to smell the whiskey on my father’s breath and feel the rasp of the stubble on his chin as he kissed me goodnight, for this time I would put my arms around him, and I would not pretend to be asleep.

Editor’s Note: Feherty explores his father’s illness in an upcoming episode of Feherty where he recently interviewed Peter Oosterhuis, who in 2015 announced that he has early-onset Alzheimer’s. 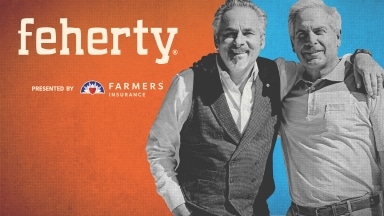