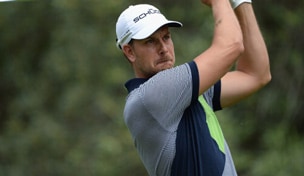 Getty Images
Webb Simpson hits out of a bunker on the second hole during the third round of the Greenbrier Classic at the Old White TPC on July 5, 2014 in White Sulphur Springs, West Virginia. (Photo by Todd Warshaw/Getty Images)  -

The deadline to commit to the first WGC event of 2014 came and went Friday evening, meaning the field is now set for next week's tilt at Dove Mountain - one that will not include three of the top four players in the world.

As expected, the list of 64 participants for the WGC-Accenture Match Play Championship does not include world No. 1 Tiger Woods, No. 2 Adam Scott or No. 4 Phil Mickelson. Instead, the top-ranked player teeing it up next week will likely be No. 3 Henrik Stenson, followed by Justin Rose, Rory McIlroy, Zach Johnson and defending champion Matt Kuchar. The beneficiaries of the three high-profile withdrawals are South African Richard Sterne, two-time PGA Tour winner Scott Piercy and Kiradech Aphibarnrat, who won the 2013 Asian Tour Order of Merit.

While the field is now finalized, the seedings and first-round matchups will be determined by the world rankings following this week's Northern Trust Open, meaning players can adjust their position for next week based on their finish at Riviera.

Included among the list of scheduled participants is Steve Stricker, who earlier this week listed himself as doubtful with his brother awaiting a liver transplant. While his exact status remains unknown, a tweet from Golf Channel insider Tim Rosaforte indicated that transplant surgery for Scott Stricker was underway Friday:

"Well, it's a go!" texted Steve Stricker as brother Scott got a donor and was wheeled into 6-12 hour surgery for a liver transplant.

The alternate list for the event is headed by American Brooks Koepka, followed by Brendon de Jonge and Peter Uihlein. If a player withdraws before the brackets are announced Sunday night, the seedings will be adjust accordingly; if the withdrawal occurs after the seeds are set, though, the alternate will take the withdrawn player's exact spot in the bracket.