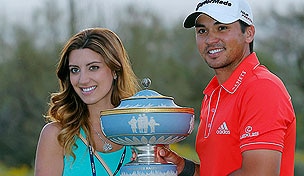 I caddied two rounds at the 2007 Chattanooga Classic on the then-Nationwide Tour, which as far as humblebrags go is sadly some of my best stuff.

During practice rounds, range sessions and other assorted downtime that week, I polled a decent-sized group of players and caddies, asking who from that circuit would be the next breakout PGA Tour star.

Seriously. No one even listed a backup option. He was that much of a lock.

And yet, if someone had told me back then that Day would be winning a WGC event in less than seven years, I might have considered those unanimous prognostications understated, if anything.

Think about it: That's a meteoric rise, especially for a 19-year-old kid who had only recently moved to the United States.

And yet, in the aftermath of Day's victory at the Accenture Match Play Championship, the word which most often followed was "finally."

I get it. The title was only his second on the PGA Tour, part of a results sheet that’s been littered with close calls, near-misses and shoulda-beens. He’s finished in the top 10 in six of the last 13 majors, including last year’s solo third at the Masters, T-2 at the U.S. Open and T-8 at the PGA Championship. Even prior to Sunday, he’d risen to top-10 in the world status based largely on these strong major championship results.

So why the collective belief that Day has somehow underachieved to this point?

Call him another victim of Tiger Woods’ – and to a more comparable extent, Rory McIlroy’s – success. When world-class players set the bar for winning big-time events at such a young age, expectations are raised for everyone else.

Which is too bad for Day. The takeaway from his portfolio of two wins and a half-dozen top 10s at majors shouldn’t be that he hasn’t yet accomplished enough to keep the masses satisfied. It’s that he’s an extraordinary talent who is trending up and on the verge of even bigger and better things in the not-too-distant future.

Even reigning Masters champion Adam Scott, a friend and countryman, sounds resigned to hand over a green jacket to Day pretty soon.

“He's obviously got to be thinking he's going to be a Masters champion one day,” Scott said this past week. "That's probably quite likely if he keeps playing the way he is and on the path he is.”

In the wake of Day’s important win on Sunday, one which moved him up to No. 4 on the Official World Golf Ranking, the narrative has already been that he was overdue to claim a big one.

I look at it differently, though. Just like those players and caddies answered years ago, he’s the next breakthrough star. Maybe it’s taken him a bit longer than players like Woods and McIlroy, but that’s hardly reason to condemn a 26-year-old golfer who’s about to raise his profile even more.