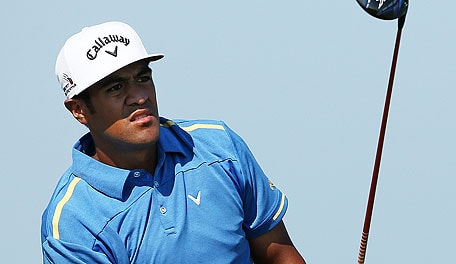 He’s the Tongan-Samoan-American rookie who grew up in Salt Lake City with his brother hitting shots into a mattress with clubs their father purchased at a Salvation Army store. He’s the kid who passed on college, turned pro at 17 and struggled to learn his trade on mini-tours after failing five times to get through the second stage of PGA Tour Q-School.

He may be playing in just his second major championship, but he’s a big hitter who seems to relish the big stages.

Finau, 25, made a run at winning the U.S. Open this summer in the first major he ever played. He was tied for fifth through 36 holes at Chambers Bay. Now, he’s back on the leaderboard at the PGA Championship.

With a 3-under-par 69 Saturday, Finau moved five shots off the lead. He’s tied for sixth.

“I feel good about what I did today,” Finau said. “It was a rough finish, but I hung in there and was pretty confident with what I'm doing.”

Finau moved within a shot of the lead on the back nine at Whistling Straits before a late stumble. He missed a 4-foot birdie chance at the 16th and then closed with back-to-back bogeys.

“I put myself in a great position today, and I was right in the thick of it,” Finau said. “I’m a little bit disappointed with the way I finished, but you never know what can happen tomorrow. If you go shoot another good one, anything can happen.”

Finau is comfortable in Wisconsin. His cousin, Jabari Parker, plays for the Milwaukee Bucks. As a 17-year-old, Finau shot a course-record 64 at Fire Ridge Golf Club in Grafton, Wis., to earn a Monday qualifying spot in the U.S. Bank Championship in Milwaukee, the old Greater Milwaukee Open.

“That was my first PGA Tour event that I ever played,” Finau said. “A lot of the people out there are yelling at me, yelling out `GMO.’ So that's pretty cool, to have kind of that fan base still following me around.”

Power and speed are great, but players focused on other ways to improve