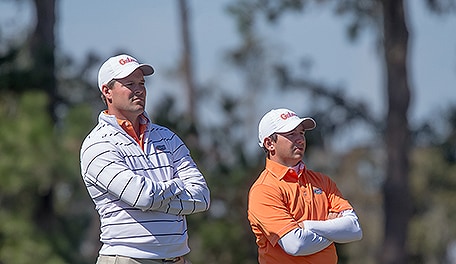 CHAPEL HILL, N.C. – Florida entered NCAA regionals as the No. 7 seed, but even that might have been generous, given its current predicament.

The Gators are playing this week without their second-best player. Freshman Alejandro Tosti, fresh off a top-20 finish at the SEC Championship, was just released from the hospital after falling seriously ill with viral meningitis.

The 18-year-old Argentine, who earlier this year came within a shot of earning a Masters invite via the Latin America Amateur, was hospitalized for a week and a half in Gainesville.

Tosti’s troubles began a few weeks ago, when he complained of tooth pain. His dentist cleaned out the infected area around an old root canal and thought he’d fixed the problem, but the discomfort persisted. A few days later, his tooth was extracted, but his headache became even worse. That’s when he landed in the hospital, where the doctors diagnosed the bacterial infection.

Three times a day a trainer pumps food through a tube that is hooked up to Tosti’s inner arm and runs through the side of his heart. On Monday night, before his team left for the regionals, head coach J.C. Deacon went to visit Tosti in the hospital and reported that he was in good spirits.

Even with both of his parents out of the country, Tosti never felt alone. He welcomed a small family within the athletic department, as more than 30 people, including his teammates, crammed into his small room to keep him company.

“It was really sad to see him in there,” Deacon said, “but it’s definitely given us a little motivation this week.”

In fact, last week, when it appeared as though Tosti would be too sick to travel, Deacon and the rest of the team made a pact to work harder than ever. Everyone logged early mornings and late nights.

“When you’re desperate,” Deacon says, “something else happens.”

Freshman Ryan Celano was tasked with filling Tosti’s void, and when he received the assignment, “I saw this look in his eyes,” Deacon said, “like, ‘It’s my time. I’m not going to let this slip away.’”

And so, to prepare for regionals, Celano played 36 holes for four consecutive days.

“We just wanted to leave it all on the table,” Deacon said.

In the opening round, the Gators shot 7-under 281 and sat in second place.

Their low scorer? Celano, of course, after his 69 matched that of teammate A.J. Crouch, who played only one tournament last year as he recovered from mononucleosis and tried to rediscover his passion for playing competitively.

“Some people might look at this and think it’s a surprise,” Crouch said, “but we’ve been right on the brink.”

Florida followed up that low round with a 4-over 292 Friday that put the Gators in a tie for fourth with one more round to go. The low five teams after Saturday’s final round advance to the NCAA Championship.

“I don’t think we would have played this well if this didn’t happen to us,” Deacon said. “It really brought us closer together, because we’re playing with a greater purpose here.” 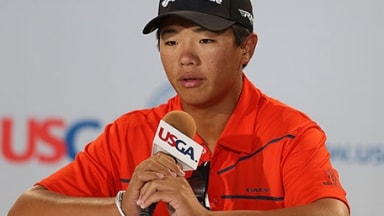 Better days are ahead for the Florida men’s team.