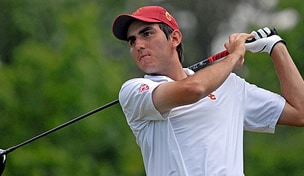 Getty Images
Since winning the Arnold Palmer Invitational in 2014, Matt Every posted just one top-10 finish and failed to complete 11 of 26 events until returning to Bay Hill and chasing down Henrik Stenson with a Sunday 66 to win the event for the second straight year. Click <a href=http://www.golfchannel.com/news/golf-central-blog/every-chases-down-stenson-wins-second-api/#' target='_blank'>here</a> for more on the story.  -

Spieth, 20, is a PGA Tour winner, a U.S. Presidents Cup member, a top-12 player in the Official World Ranking.

Just 2 ½ years ago, though, he was merely part of a heralded 2011 high-school class that included Patrick Rodgers, Justin Thomas, Michael Kim, Ollie Schniederjans and Anthony Paolucci.

They’ve all charged ahead with varying degrees of success.

Rodgers is a junior at Stanford, a seven-time winner who is one title away from becoming the second-most prolific winner in school history, behind only that Tiger guy (11).

Thomas, the 2012 NCAA Player of the Year, and Kim, the 2013 POY, have since turned pro and will compete this year primarily on the Web.com circuit.

Pan is still at Washington, and he drew national attention last year when he made the cut at the U.S. Open. Schniederjans, in his third year at Georgia Tech, is a top-10 player in the nation.

And then there is Paolucci, the 2010 Junior Player of Year who so frequently battled Spieth in AJGA events across the country, teamed up with him at the Junior Ryder Cup, competed for PGA Tour sponsor exemptions and jostled for junior golf’s No. 1 ranking. Paolucci and Spieth were even frequent combatants in the Dallas area, before Paolucci and his family moved to Del Mar, Calif.

On Tuesday, after two and a half years at USC, Paolucci finally won his first college event, making birdie on the final hole to win the Jones Invitational. It was the 21-year-old’s fourth top 10 of the season and fifth in the top 12. He is No. 33 in Golfstat’s individual rankings.

“Obviously I’m very happy for picking up my first win,” he said in a school release. “I’m glad I could finally break through.”

Paolucci had just one top 10 in his first season with the Trojans but improved slightly in Year 2, tying for second in a tournament at PGA West and tacking on a pair of other top 10s.

Last fall he tried his luck at Web.com Tour Q-School. He earned medalist honors at second stage, but then finished T-95 in the finals – not good enough to lock up significant status – and returned to L.A.

A setback, perhaps, but this season Paolucci is beginning to show the kind of promise that made him one of the can’t-miss prospects coming out of high school.