Four shots from one bunker derail Fowler on Day 1 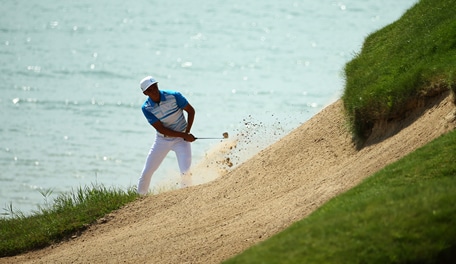 SHEBOYGAN, Wis. – Rickie Fowler was – once again – a chic pick to win his first major at this week’s PGA Championship. But his bid took a serious shot at the par-3 third hole Thursday, when he required four shots to get out of a bunker.

Fowler, who started on the back nine, began his round with consecutive birdies and was 3 under through 11 holes. He then reached the 181-yard No. 3 and its very steep hazard. After pulling his tee shot into a left greenside bunker, it wasn’t until his sixth swing on the hole that he finally used a putter. He needed it for his seventh, as well.

“He played solid and he was just unfortunate with where his ball finished on that par 3 and there was no way he could have got up over that hill. And he tried it twice and it went sideways from there,” playing competitor Jason Day said.

“There's plenty of golf left and he still has a lot of chances out there.”

Fowler went on to birdie his next hole and shot 1-over 73.