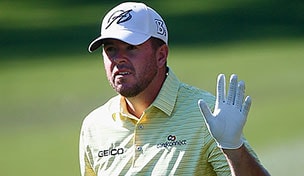 PALM HARBOR, Fla. – Robert Garrigus’ pair of 4-foot misses on the back nine Saturday could loom large in the final round.

The big-hitting 36-year-old has only a one-shot lead over Kevin Na heading into what is expected to be a wild and windy final day at the Valspar Championship.

This is the fourth time in his career that Garrigus has held at least a share of the lead heading into the final round. Each time he has failed to convert, eventually finishing second.

Most memorable, of course, was the 2010 St. Jude Classic, where Garrigus held a two-shot lead after 54 holes. He appeared on his way to earning his first career title, only to make triple bogey on the final hole and drop into a three-way playoff, eventually won by Lee Westwood. Garrigus won later that year at Disney, where he closed with 64.

Next came the 2011 Tournament of Champions, where Garrigus was tied after three rounds with Jonathan Byrd. Both players shot 67 on the final day, but Byrd prevailed in extra holes.

And finally, Garrigus had a one-shot lead at the 2012 Canadian Open, but his final-round 70 wasn’t enough to capture the title. He was passed on the final day by Scott Piercy’s 67.

“I’m in a good position,” said Garrigus, at 8-under 205. “If I play well (Sunday) and shoot under par, they’re going to have to come get me. That’s what I plan on doing. I can’t sit there and make pars and expect to win the golf tournament.”