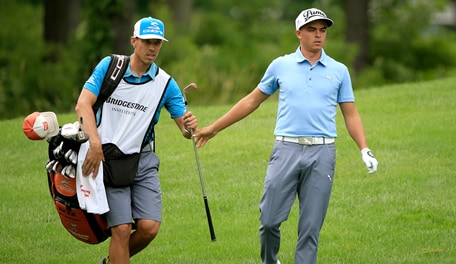 AKRON, Ohio – Rickie Fowler is picking up where he left off at the WGC-Bridgestone Invitational.

Fowler finished second last week at the Quicken Loans National, and he opened with a 3-under 67 at Firestone Country Club that served as the lowest score of the morning wave. While many players cited firm conditions and tricky greens, Fowler saw things differently.

“They’re actually pretty soft compared to yesterday,” Fowler said of the greens. “I was expecting them to be a bit firmer today. There’s still some sections where they were firm, and they’ll continue to dry out as the day goes on. But they were softer this morning than I was expecting.”

Fowler’s scorecard included four birdies against one bogey, with the highlight coming on No. 3 when he chipped in for birdie from in front of the green. While he found just 10 of 18 greens in regulation, Fowler needed only 25 putts to complete his round.

After top-five finishes in each of last year’s majors, Fowler has taken his game to another level this year with a pair of victories. The most recent of those came at the Scottish Open, the week before the Open Championship, and Fowler sees this week as both a top-tier event and a great way to prepare for next week’s PGA Championship.

“I think being in contention and kind of getting things going the week before really almost helps you,” he said. “It settles your nerves the next week to know that you were already there just a few days prior and kind of gone through everything. I think it relaxes you a little bit.”