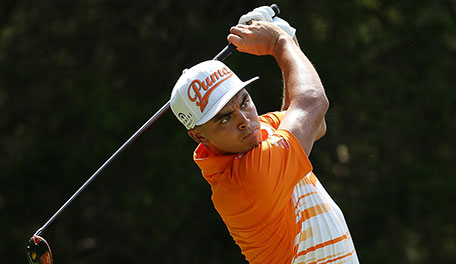 GAINESVILLE, Va. – On Saturday, Rickie Fowler vowed to correct the bad swings that prevented him from taking control of the Quicken Loans National, but on Sunday it was more of the same as Fowler came up three strokes shy of winner Troy Merritt.

The world No. 8 made seven birdies, but was held back by five bogeys in a final-round 69. It was a nearly identical day as Round 3 where he made a run at the lead only to follow it up with a bogey.

"I was able to kind of rally and make some birdies coming in, but really disappointed with how I went out," Fowler said. "Didn't get anything going. Made a few mistakes. Before I know it, I'm a couple over par and kind of fighting my way to get back in the tournament."

Still, with wins already at The Players and Scottish Open, Fowler heads into the next two weeks at Firestone and the PGA with plenty of confidence.

"I've been swinging really well as of late," Fowler said. "Really feel good about my game. Butch [Harmon] and I have done some great work. Really looking forward to the rest of the summer. Akron is one of my favorite courses we play all year, and [then] the final major ... This is a good time to be playing well."