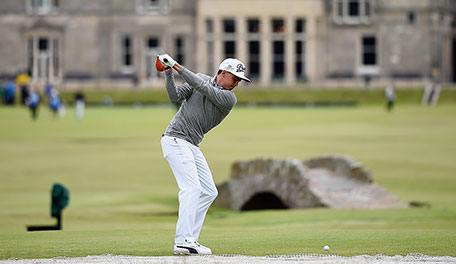 ST. ANDREWS, Scotland – It’s over 5,000 miles from Murrieta, Calif., to St. Andrews, Scotland, but the way Rickie Fowler has proven himself a quick study on links courses in his young career, the 26-year-old may as well be a native Scot.

From his first exposure to links golf at the 2007 Walker Cup at Royal County Down in Northern Ireland, he easily took to it and has enjoyed steady improvement since.

In five starts at the Open Championship he has two top-5 finishes, including a runner-up showing last year to Rory McIlroy, and he won last week’s Scottish Open just down the coast at Gullane after tying for eighth last year.

“For me, growing up on the driving range back home, I really had to kind of visualize my shots and learn how to hit shots there,” he said on Tuesday at St. Andrews. “It was basically like hitting into a bare field. I feel like that’s what you have to do in links golf.”

Despite that familiarity with what it took to play links golf, it wasn’t until the 2010 Open at St. Andrews that things started to fall into place at the game’s oldest championship.

“When I believed that I could really win over here was after my stellar start of 79 here,” he recalled. “I shot 67 to make the cut and went on to have a great weekend, ended up finishing 14th.”

The oddsmakers have taken notice of his links history, as well as his victory earlier this year at The Players, and pegged Fowler as a favorite at 20 to 1, just behind Jordan Spieth.