Fowler fights through 'sloppy' round at Quicken 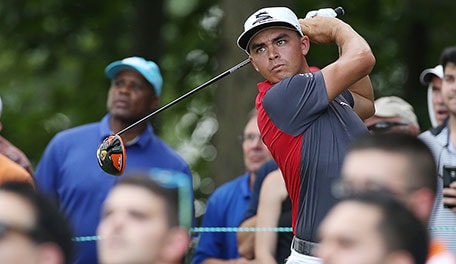 GAINESVILLE, Va. – Rickie Fowler's third round at the Quicken Loans National had some ugly moments, but he strung together a 3-under 68 and now has a chance on Sunday to win his third title of the season.

"Little frustrated with a couple mistakes that I made out there today, but excited about where I'm at," Fowler said.

Fowler will start the final round one stroke behind co-leaders Kevin Chappell and Troy Merritt, who are both looking for their first PGA Tour win.

The world No. 8 won his second title in May at the Players, and then he added another trophy last month on the European Tour at the Scottish Open.

Fowler could have taken control of the tournament Saturday, but each time he got on a run, he made a couple of bad swings that led to three bogeys.

"I was a little sloppy at times," Fowler said.

Fowler birdied No. 2, but came up 55 yards short of the green on 3 and made bogey. He got the crowd at Robert Trent Jones Golf Club roaring when he drained a 70-footer for birdie on the par-3 4th.

"That's one you're just hoping to two-putt and stay away from making bogey," he said.

Fowler added birdies at 6 and 10, but needed two shots to get on the green at the par-3 11th after pulling his tee shot left of the green. He rebounded again with birdies at 14 and 16, but then he hit a horrendous shot from the fairway dead left on 17 and made another bogey.

"I had a good number on 17 and just made a bad swing," Fowler said. "Got those out of the way and there's tomorrow."