Fowler moves to career-best No. 5 in OWGR 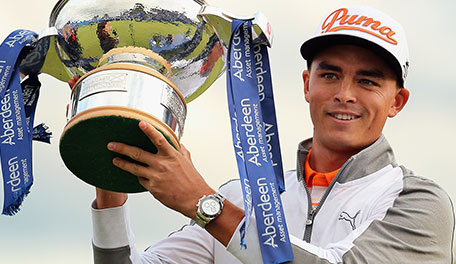 Rickie Fowler reached some rarified air thanks to his win at the Aberdeen Asset Management Scottish Open.

Fowler birdied the 72nd hole to sneak past Matt Kuchar at Gullane, and the reigning Players champ moved from No. 9 to No. 5 in the latest Official World Golf Rankings as a result. This week's standing marks a career-best for Fowler, who began the year at No. 10 in the world.

Jordan Spieth's playoff victory at the John Deere Classic cemented his hold on the No. 2 spot behind Rory McIlroy, and it gave Spieth a small window to claim the top spot. Already with two majors under his belt this year, Spieth would supplant McIlroy atop the standings should he win the Open Championship this week at St. Andrews.

The weekend leaderboards in both Scotland and Illinois included a few unheralded names, some of whom made big jumps in the latest rankings. Tom Gillis was denied his maiden PGA Tour win by Spieth, but the 46-year-old still earned a trip to St. Andrews with his runner-up finish at TPC Deer Run and also jumped from No. 643 to No. 277 in the rankings. Raphael Jacquelin, who tied for second with Kuchar behind Fowler, moved from No. 335 to No. 181. After nearly pulling off back-to-back wins, Danny Lee jumped another nine spots from No. 78 to No. 69 following his T-3 finish at the Deere.

Tiger Woods did not play this past week, and he will enter the season's third major at No. 241 in the world, just behind Mardan Mamat and Ikjae Jang, after dropping another 15 spots in the latest standings.