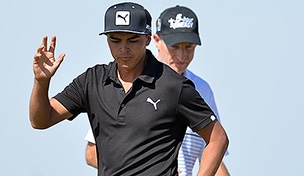 Getty Images
KUALA LUMPUR, MALAYSIA - OCTOBER 31: A volunteer holds up the quiet sign on the 1st hole during round three of the CIMB Classic at Kuala Lumpur Golf & Country Club on October 31, 2015 in Kuala Lumpur, Malaysia. (Photo by Stanley Chou/Getty Images)  -

MARANA, Ariz. – The annual distraction that is the consolation match at the WGC-Accenture Match Play Championship delivered a rare level of intrigue on Sunday at Dove Mountain.

Rickie Fowler, who lost to Jason Day in the morning’s semifinal match, outlasted Ernie Els in the consolation bout to take the bronze medal, but not before the South African made things interesting.

Els missed a 13-footer for par at the last hole in his semifinal tilt against Victor Dubuisson to fail to advance to the finals for the 14th time. In the consolation match, Els rolled in a 7-footer for birdie on No. 18 to force extra holes but was beaten on the 19th hole when Fowler converted from 6 feet for birdie.

As an added bonus, Fowler’s third-place finish assured him enough world ranking points to move into the top 50 and qualify for the WGC-Cadillac Championship in two weeks at Doral.

“I was kind of planning on it in the beginning of the year and three missed cuts drops you in the world ranking pretty quickly,” said Fowler, who had dropped to 56th in the world. “I knew my game was in good position, just hadn’t been making cuts. It probably looked a lot worse than it did.”