Furyk (66) feels at home at Firestone 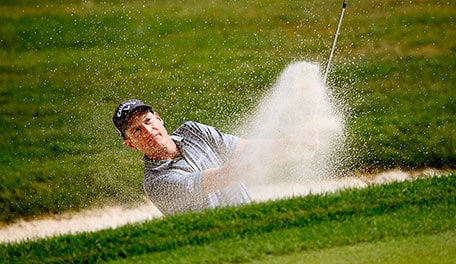 AKRON, Ohio – With its narrow, tree-lined fairways and lush rough, Firestone Country Club presents a stern test that can frustrate even the best players. For Jim Furyk, though, it feels like home.

Furyk grew up in western Pennsylvania, a few hours’ drive from this week’s venue, and his affinity for the South Course continued Thursday with an opening-round 66. At 4 under, he trails Danny Lee by one shot as he looks for his fifth top-15 finish at this event since 2010.

“It reminds me of golf courses I grew up on,” Furyk said. “Everything’s right in front of you. There’s not a lot of blind shots. I just feel like I know where I’m supposed to put the ball. It’s a matter of being able to do it. The years I’ve played well, I feel like I’m on top of my game.”

Furyk finished fourth at the RBC Canadian Open in his most recent start, and he built upon that momentum on a round where he carded six birdies. He briefly shared the lead before a bogey on No. 18, but he remains in the early mix on a course where he finished second in both 2001 and 2012.

Thursday’s opener was Furyk’s sixth straight sub-70 round at Firestone and 26th such round here since 2005, the most of any player and seven more than his closest competition, Zach Johnson.

“I’m comfortable here. I’ve always liked this golf course,” he said. “It’s one of my favorites. It’s in the top five for me.”