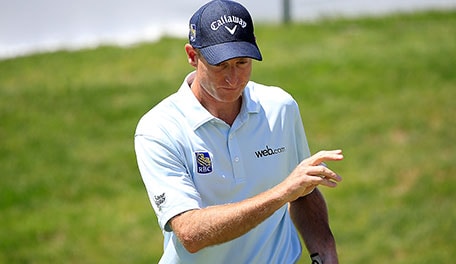 AKRON, Ohio – Firestone Country Club continues to prove a stern test for the world’s elite, as firm conditions have turned par into a desired score. Here’s how things look at the halfway point of the WGC-Bridgestone Invitational, where Jim Furyk leads by four:

What it means: Furyk started the day one shot off the pace but shot his second consecutive round of 4-under 66. While many others have been vexed by the conditions at Firestone, Furyk appears right at home and is halfway to his first victory here after a pair of runner-up finishes.

Round of the day: Furyk circled seven birdies during the second round, and now has birdied 13 of his first 36 holes. Furyk at one point amassed a six-shot lead, thanks in large part to an inward nine that included three birdies in a four-hole stretch from Nos. 5-8.

Best of the rest: Watson can bomb it with the best of them, and he found his groove Friday with a 4-under 66 of his own. He birdied three of his first eight holes and six birdies overall to move into a share of second place, four shots back.

Biggest disappointment: Rickie Fowler was one of the early contenders at Firestone, but he fell well off the pace after a 2-over 72 in the second round. Fowler made only two birdies while carding four bogeys, including two over his final three holes, and at 1 under he now trails Furyk by seven shots.

Main storyline heading into Saturday: There are several stars on the leaderboard, but the player to watch is Furyk. After close calls here in both 2001 and 2012, the veteran is halfway to a very meaningful win, one that would mark his second victory of the year after he endured a winless drought of nearly five years.

Quote of the day: “I would say that I’m disappointed I’ve never won here. It’s one of my favorite courses we play.” – Furyk